Washington, DC, December 30, 2017 –(PR.com)– The American Mideast Coalition for Democracy (AMCD) applauds the proud Iranian people’s peaceful protests over the actions of the few non-elected, self-appointed Iranian regime officials. They encourage the Trump administration to extend active support to the large and growing secular element of Iranian society in their quest for freedom and their will to embrace modernity.

“Freedom and Liberty are God given rights equally owned by Iranians who wrote the first declaration of human rights 2500 years ago,” said AMCD’s founding member Hossein Khorram. “It a shame this resourceful nation with such a rich history has become victim to the tyranny of a handful of mullahs at the head of its corrupt theocratic government.”

As the signatory to the Universal Declaration of Human Rights, AMCD insists the US must hold the Iranian regime responsible for the welfare and safety of Iranian people exercising their right to a peaceful protest.

“Before the Iranian regime expects respect from other nations it must respect their own people and immediately release all of those who have been arrested during these peaceful protects,” declared AMCD’s President John Hajjar.

“The Iranian regime’s failure to respect their citizens’ rights will only deepens the existing mistrust towards that regime and will increase the international community’s sanctions against the regime,” he continued.

“The remarkable will of the Iranian people to denounce terrorism will force the end of terrorist groups supported by Iran such as Hezbollah, Hamas and others who are fomenting instability throughout the entire region,” added AMCD’s Co-Director, Tom Harb.

We at AMCD stand shoulder to shoulder with the Iranian American Community in support of freedom and liberty for the Iranians who have enriched the world with their enormous contributions to humanity. We declare the time has come for the regime to concede their power back to the people of Iran and to allow them to determine their own destiny as full and equal members of the modern world. 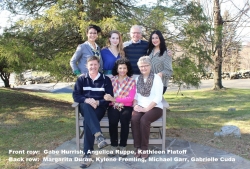