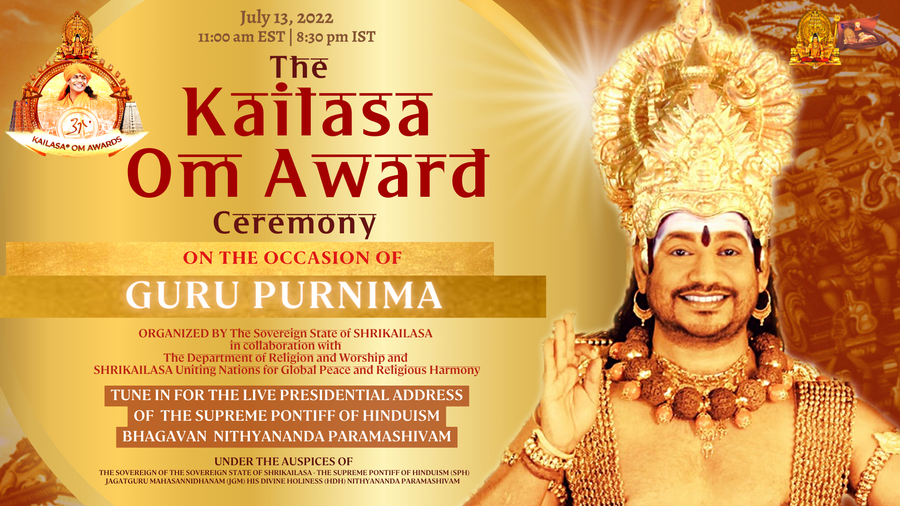 July 13, 2022 marks the auspicious celebration of Guru Purnima along with the Global Peace Conclave and KAILASA® Om Awards Ceremony

LOS ANGELES, CA, July 15, 2022 /24-7PressRelease/ — With the grace and blessings of The Supreme Pontiff of Hinduism (SPH) Nithyananda Paramashivam, SHRIKAILASA’s Department of Religion and Worship and the SHRIKAILASA Uniting Nations (SKUN) for Global Peace and Religious Harmony hosted the Virtual Global Peace Conclave and the KAILASA Om Award Ceremony on the auspicious occasion of Guru Purnima Day.

Guru Purnima Day is a day to celebrate the happening of the Guru in our lives. It is a day when disciples offer gifts of gratitude to the Guru and, in return, the Guru liberates them from negative patterns that are blocking their success. For this reason, Guru Purnima is key to achieving higher states of consciousness since lifetimes of negative patterns are dissolved by the Guru.

The word Guru is the combination of two Sanskrit words – “Gu” meaning darkness and “Ru” meaning light. A Guru is a spiritual teacher, guide or enlightened master who leads disciples from darkness to light. A fundamental aspect of Hinduism is the Guru-Disciple relationship. The Guru is said to be more important than God. God is always and everywhere, but it is the Guru who opens the Disciple’s eyes to the existence of God. The Guru is the doorway to one’s own experience of the Divine.

The syllable gu is darkness, and the syllable ru is said to be light. There is no doubt that the Guru is indeed the supreme knowledge that swallows the darkness of ignorance.

Hinduism reveres the Guru as a direct manifestation (Avatar) of Paramashiva – the Ultimate Supreme Being. When an Avatar descends as Guru, not only does He lead us to enlightenment, He creates a breakthrough in all of humanity, taking them to a whole new level of superconsciousness and manifesting superhuman powers as a side effect.

The Sovereign of the Sovereign State of SHRIKAILASA, The SPH Nithyananda Paramashivam is the reviver of Hinduism and SHRIKAILASA®, the Ancient Enlightened Hindu Civilizational Nation, the First Nation of Hindus. SHRIKAILASA (or KAILASA®) has been working ardently using the science of enlightenment based in Hinduism to support humanity for global peace (ahimsa), gender equality, fight against global warming, universal free access to holistic education and healthcare, and veganism as per Hinduism.

At the young age of 3, The SPH was already recognized as an Incarnation of Paramashiva by His predecessors of Masters and Adepts. At just the age of 16, The SPH was coronated to revive SHRIKAILASA, the only First Nation for Hindus. And in 2015 He was elected as the Supreme Pontiff of Hinduism of the 2-billion Hindu diaspora worldwide by a congregation of over 1000 Hindu leaders (Pontiffs).

On this day we offer our heartfelt gratitude to The SPH, the Guru for millions, for his guidance on our spiritual journey and for his tireless work towards global peace and the revival of KAILASA – the most ancient, most peaceful, still-living and long lasting demonstrable system that shows the possibility of peaceful co-existence amongst people despite fundamental differences in their preferences and realities.

The KAILASA Om AwardSM were conferred to the following dignitaries in recognition of their hard work, achievements and efforts towards creating global peace and promoting peaceful co-existence:

The KAILASA Param Veer Chakra award was conferred to the 11 people killed tragically on April 27, 2022 after a temple chariot came in contact with a high tension electric wire during a chariot procession, as part of the Appar Swamy Mutt festival at Kalimedu in Thanjavur district of Tamil Nadu.

Certificates conferred to The SPH for yoga include:
Asia Book of Records Certificate and India Book of Records Certificate for the maximum traditional asanas performed in one hour by a group on June 21, 2022
Guinness World Records for the largest rope yoga lesson (Kundalini Rajju Yoga℠) on September 30, 2017
Guinness World Records for the largest pole yoga lesson (Shivasthamba Yoga℠) on October 3, 2017

April 2022: In the midst of a global food crisis, SHRIKAILASA ensures no one goes hungry by implementing sustainable food systems and distribution chains globally.

During the Chithirai Brahmotsavam celebrations which started on April 5th, 2022, Annadhan services (free organic vegetarian food distributions) are being provided in several places in Tiruvannamalai, Madurai, Thanjavur and Sripuram-Hyderabad in India, enriching hundreds of thousands of pilgrims flocking the celebrations.

Overall, post-covid, SHRIKAILASA has restarted its 24/7 Annadanam services as per the vision of The SPH Nithyananda Paramashivam of “No-Hungry Home”. Exceeding all expectations to serve humanity at this greatest time of need, The SPH Nithyananda Paramashivam has declared on April 15, 2022, “I will soon launch food vending machines which will give free food at the touch of a button, 24/7.”

Previous KAILASA Om Award Ceremonies:
On April 7th 2022, The KAILASA® OM Award conferred to four (4) leaders across three (3) countries for distinguished service in the field of health and wellness, on occasion of World Health Day.
https://tinyurl.com/Apr7-kailasaomaward 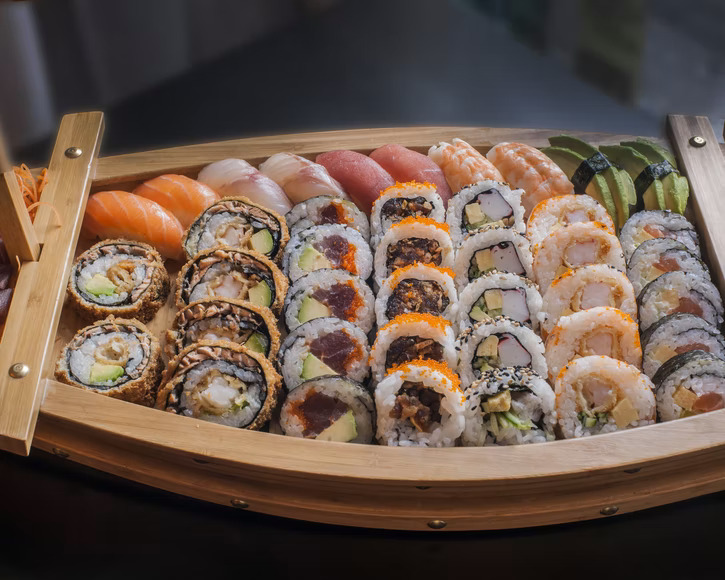 Pizza or Sushi: What to Choose for a Perfect Picnic? 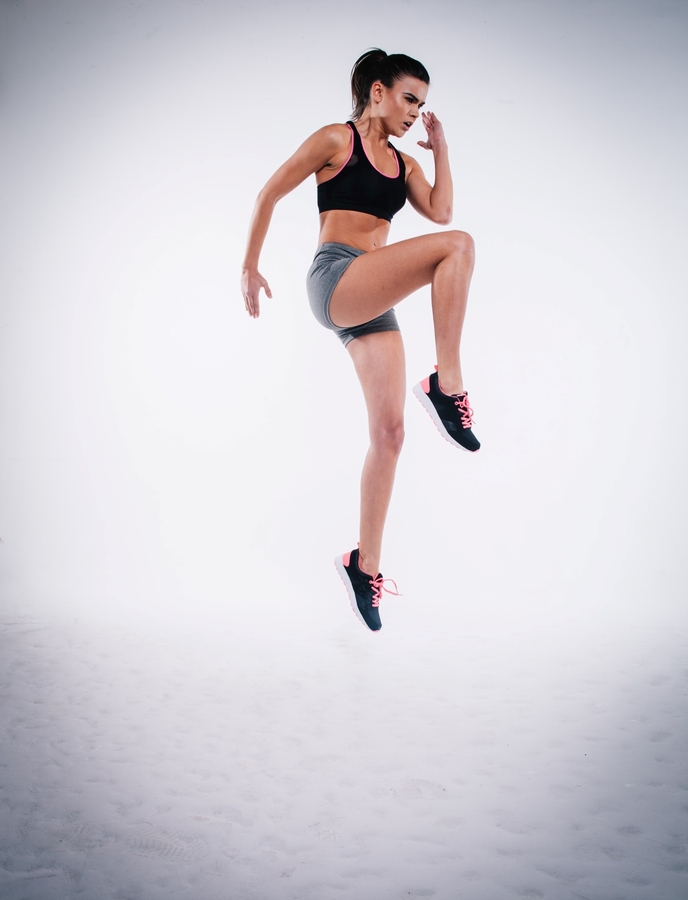 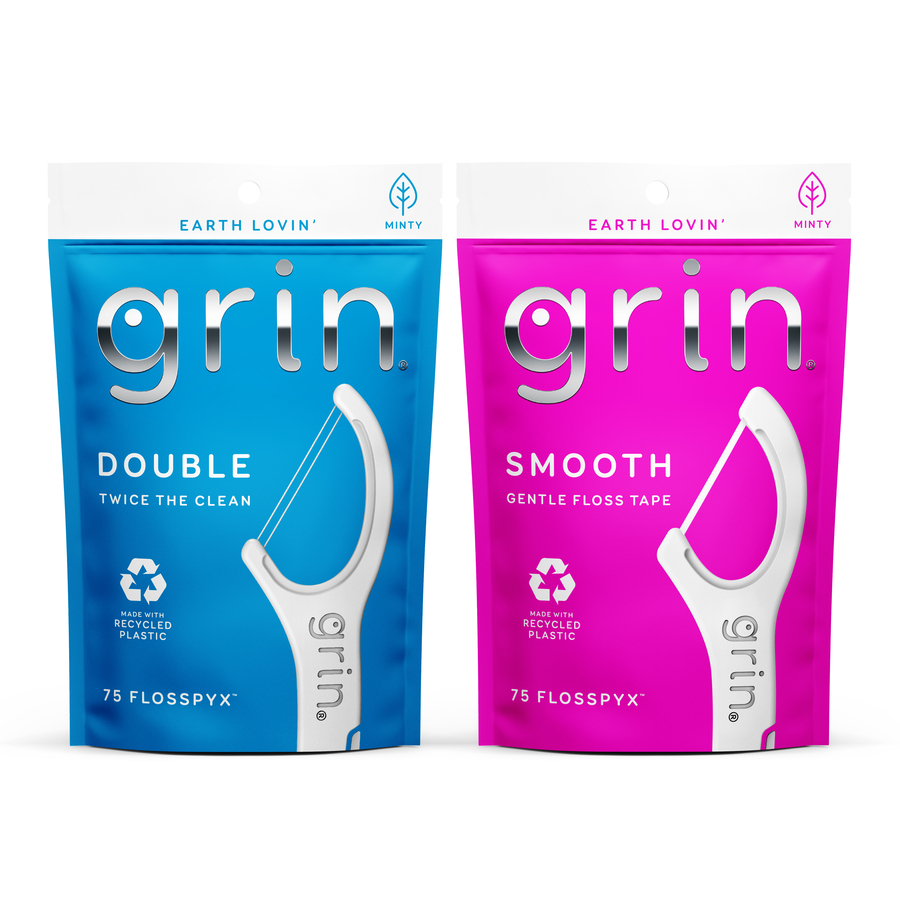 A New Era of Oral Care: How Grin Oral Care Took the Market By Storm. Promoting an ‘Earth Lovin'” Attitude